I first heard "Dear God" roughly 30 years ago when a student (who I will call "Julie Brannon" to protect her anonymity) made a mix tape for me so I'd know "what cool people listen to." Of the 20-25 songs on the tape, "Dear God" was my favorite. I liked everything about the song, the child's opening and closing it, Andy Partridge's voice (it sounded exactly like the Eighties) ,the increased intensity and tempo of the last stanzas (possibly called accelerando or maybe crescendo -- you make the call), and most of all the subject matter.

The song presents a facile argument, and maybe that's why it's cathartic for many of us. We expect little more from a "rock" or "pop" song. Partridge is venting for his fans, not inviting the meditation evoked by, for example, Leonard Cohen's  "Anthem." 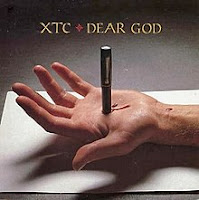 What I try and fail to do in the following is to slow down "Dear God" enough that I can ponder Partridge's topic and his presentation of it with both the seriousness and playfulness it deserves. A song about our "ultimate concern," whatever it is we place atop all our priorities, should be looked at with both a cold eye and a wink, don't you think?

So here is part one. The song's lyrics are here in their entirety, and the peculiar Vimeo video is here.

(1) XTC  Phonologists and phoneticists all agree that the letters x, t and c, when spoken aloud in that order, create the sound "ecstasy." Once the letters are rearranged, however, the sound is pure gibberish, so I suggest not rearranging them.

(2) Written by Andy Partridge  No connection, either genealogically or culturally, has been found between lyricist Andy Partridge and TV's gifted musicians the Partridge Family.

(3) Dear God, hope you got the letter (3)  The opening line offers much unpackable material. Given the content of the song, "Dear" must be seen as ironic, bordering on oxymoronic. The God addressed in the following lines is not in any way "dear" to the narrator.

Furthermore, "Dear God" mimics the conventional salutation of a letter and thus identifies the poem as epistolary. The remainder of the line -- "hope you got the letter" -- seemingly refers to a previous letter, now lost to history, to which this one is a follow up.

Some scholars claim the poem is an apostrophe as well as an epistolary piece, such as Dylan Thomas's "Death, Be Not Proud," Cohen's "If It Be Your Will," and "O courage, could you not as well / Select a second place to dwell?" from Tennessee Williams' Night of the Iguana.

This poses a thorny question: Does the narrator believe he is addressing a dead or absent God or does he see God as an inanimate object capable of reading a letter sent by someone who doesn't believe He exists? Perhaps Partridge will settle this debate later in his poem.

Finally, these introductory lines come from a child, evoking a host of biblical passages: Isaiah 11:6 ("And a little child shall lead them"), Psalm 8:2 ("Out of the mouth of babes and sucklings hast thou ordained strength because of thine enemies, that thou mightest still the enemy and avenger"), Matthew 19:14 ("Let the little children come to me and do not try to stop them, for the kingdom of heaven belongs to such as these"), and others.

While this adds to the poem's pathos, the irony is as rich as it is obvious. The child who leads us and from whose mouth comes strength and to whom the kingdom of heaven belongs (I'm picturing Emma Gonzales here!), this very child now confronts his maker with a tone that rapidly evolves from deferential to righteously indignant.

(4) And I pray you can make it better / Down here. The narrator uses both human (a letter) and divine (a prayer) means to express his request. Also, in "Down here," note the time-honored spatial distancing between creator and creature, i.e., the creator being a sky god (called Nobodaddy by William Blake), the creature being earth bound.

(5) I don't mean a big reduction in the price of beer   Many Partridgeans argue that the poet would gladly accept a small reduction in the price of beer, regardless of his belief or lack of same. Evidence suggests Partridge was aware of the aphorism attributed to Benjamin Franklin, "Beer is proof that God loves us and wants us to be happy," but unaware of Brett Kavanaugh's lip-smacking beer fetish

(6) But all the people that you made in your image / See them starving on their feet / 'Cause they don't get enough to eat / From God  As the first stanza comes to a close, the narrator acknowledges that the God he doesn't believe in attempted to duplicate in humans his own image and, we assume, his beauty, wisdom and sense of humor, and who is also the sole provider of their sustenance, possibly echoing Blake's "The Lamb": "Gave thee [the Lamb] life and bid thee feed / By the stream and o'er the mead." When his people are "starving on their feet," it's because they didn't "get enough to eat / From God" -- the same God the narrator can't believe in!

(7) Dear God, sorry to disturb you, but I feel /That I should be heard loud and clear  This is a much more civil and reverent supplication than the one we heard from the pissed off Job insisting that the God he does believe in account for his (God's) unspeakable cruelty. But maybe the narrator should have been more cantankerous, should have shaken his fist harder because, unlike Job, he gets no Divine response.

Granted, Job was essentially told to shut the freak up, but at least it was something.

If you're fond of labeling and classifying, both works could be considered "literature of divine rebellion." The Book of Job could be called a theodicy, a defense of God's goodness and omnipotence coexisting with evil, suffering and the like. No such defense in "Dear God."

(8) Did you make disease and the diamond blue?  What a rhetorical rat's nest we have here! These must be rhetorical questions since the narrator doesn't believe in God and thus cannot expect him to answer them.

But to what effect? Asking God if he is equally responsible for abundant pain and starvation, inevitable deteriorating health followed by death as well as the bountiful wealth acquired by the few (1%?) imaged in the "diamond blue" -- does this challenge God's existence or his goodness or his power?

Is this Zoroastrianism, i.e., an eternal struggle between a good spirit and an evil one?

Is the narrator suggesting a yin and yang deity in which the dark and light are complementary? No. The dark is unacceptable, esp. if there's an omnipotent God in the house.

Is it an either-or fallacy, a bifurcation, an oversimplification, to wit, "Make up your mind, God. You can't be real if you create both beautiful fall days and lethal Category 5 hurricanes; or, if you are real, you are weak on this earth and therefore can't be counted on to intervene when we need you, e.g., when we're starving or our house is floating down the Mississippi or we contract terminal cancer."

The narrator is essentially plagiarizing both Psalms 22:1 and Matthew 27:46: "My God, my God, why hast thou forsaken me?" Also rendered in Aramaic dialect: "Eloi, Eloi,  [or Eli, Eli] lama sabachthani?"

Forsaken, his belief melts quicker than the wet wicked Witch of the West, and who can blame him?

But unheard pleas for help do not necessarily suggest a nonentity. The whole mixed blessing dilemma has been acknowledged for centuries. We've all heard the old maxims that give no comfort, "The Lord giveth, the Lord taketh away," and "The sun shines and the rain falls on the just and unjust alike."

Now, because long reads are disappearing as fast as newspapers, Borders bookstores, Sears, ice caps, frogs, bees, CD players, iPods and original movies, I will stop here to give the reader a breather. Part two will appear on this space within 48 hours. Thanks for reading so far. Please offer suggestions so that I can completely ignore them.
Posted by Roy Starling

Email ThisBlogThis!Share to TwitterShare to FacebookShare to Pinterest
Labels: Poetry