Is Cormac McCarthy for Students?

I’m sitting in a local coffee shop waging a pleasurable war with Cormac McCarthy’s prose in his 1979 novel Suttree, and I’m also trying to keep my coffee and croissant from coming back up as his prose delivers images that disturb all five of my senses. As usual, McCarthy builds his masterpieces out of mud, blood, pig guts, sewage, gout and slag (two of his favorites) and worse.

A plot synopsis isn't going to help much, but I will tell you that Cornelius "Buddy" Suttree has for some reason left his family to live among the river people, scratching out a living selling fish. He is deep into alcoholism, and the company he keeps make Gomer Pyle, Jethro Bodine and Ernest T. Bass look like models of intellect and refinement.

Out of habit, I think about how I would teach such a book, and I quickly realize that, for many reasons, parents and school officials would label it inappropriate for teenaged readers, the same parents and administrators who have never walked down the halls of a typical middle school and heard language inappropriate for hardened criminals and combat veterans.

And Suttree could not be taught at a university without a list of trigger warnings that would fill an old-fashioned phonebook. There’s something in there to offend everyone, mainly because it tells the truth.

Furthermore, on both the high-school and university level, students would find McCarthy’s language impenetrable. I know of no English word sufficient to describe his word choice. I am a life-long reader with a small truck full of degrees in English, and I’m lucky to get through a page without having to sneak a peek at dictionary.com or wrack my brain to decipher in context the meaning of an alien configuration of letters. Or, more likely, just take the sentence’s dense, obscure but evocative poetry on faith and enjoy its strangeness, as a puzzle to be marveled at.

For these reasons, 96% of students of any level would stop reading and retreat to the all-embracing but narrow-sighted, undiscerning, oversimplified arms of the whore Spark Notes with its seductive air of academicese.

But are those reasons sufficient to back away from such books as Suttree? No.

For one thing, some public schools still teach Shakespeare, even though at my old school most kids were all done with the Bard after they clawed their way through Julius Caesar, both the play and the entirety of the Marlon Brando movie, in tenth grade.

Still, decades ago, progressive, idealistic teaching gurus argued that we were ruining Shakespeare for students by forcing him on them before they had the maturity to understand him. We were teaching them only that Shakespeare was difficult, that he did not reward the time they invested with any immediate pleasure, with few if any shocks of recognition or startling insights. Therefore, to the students, at least, he was boring. 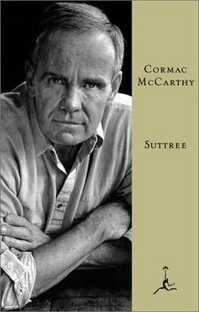 Years later, these same kids would grow up and attend cocktail parties where, while sipping a Manhattan, they would embarrass themselves by saying “I couldn’t get into Shakespeare. That Old English was just too hard to read.”

(Are we supposed to wait for human beings to mature into an understanding of Shakespeare? As a great critic once observed, “We all misunderstand Shakespeare in our own way.”)

In short, some schools still teach Shakespeare even though most students have no clue what’s happening in his own language.

So despite his obscurity, maybe we should consider tossing McCarthy into the mix. He is, after all, considered by many critics and fellow writers to be among America’s very best living novelists (unless he died last night). It is worth giving students a chance to see why that’s the case.

This, of course, would force teachers to stop thinking about those Godforsaken useless Marzano teacher-evaluation indicators long enough to pick up a new and challenging novel and figure out ways, probably not including infantile Kagan exercises, to help students see McCarthy’s brilliant achievement.

For all the mysteriousness and Otherness of Suttree, there are intelligible things to be said about how McCarthy uses literary techniques, for example, to make us feel like our feet are stuck in mud, as are the characters’, or like we are trying to escape danger in a nightmare, but are paralyzed. And how does McCarthy use his syntax to make time itself sluggish, to bind a reader to a particular page well past the usual 2-minute rule, well past the time the reader wants to spend there, because it is not a comfortable place. How does he hypnotize the reader into lingering over passages he would otherwise skim?

This stuff doesn’t just happen. It would be productive for a teacher to think through McCarthy's choices and their effects as he writes and revises. It would keep the teacher from explaining for the eighty-third time why Harper Lee decided to have Atticus Finch man up and shoot that damn rabid dog.

Aside from McCarthy’s dazzling technique, his works, esp. Suttree, contain cultural data which educators now claim to hold so dear. His depiction of the very poor (about which I’ll say more in a future post) would teach kids a whole lot they should know about the Land of Opportunity and the conditions of the euphemistically labeled “less fortunate.” I’ve not seen such a muted, unsentimental, non didactic, non whiny, deadpanned depiction of the hopeless condition and necessarily flexible morality of the undeserving poor since Hansel and Gretel’s mom tried to starve them, and her alter-ego in the forest tried to eat them.

Admittedly, students would not read all of Suttree, in fact, they would read very little of it. Happily, they'd be unlikely to reach the parts that would disturb their parents and/or youth ministers. But in art history, they can’t see all of the dabs and mini-strokes Van Gogh used to create “Starry Night” either, but the teacher helps them see enough, and if students have an inquiring mind, they have the rest of their lives to fill in the gaps.

Two more arguments for teaching masterworks that may be considered unreadable and inappropriate:

First, I learned long ago that few students, even in the varsity course Advanced Placement Literature, actually read the assigned books. For a while, I tried down-sizing and dumb-downing to put the works closer to their reading sweet spot, but that made me feel cheap, and besides, they didn’t read those either.

So I decided if they weren’t going to read books, they might as well not read great books.

This led me, for example, to John Fowles’ French Lieutenant’s Woman, and it became the favorite of a handful of my young scholars and exposed all of them to some thoughtful discussions of a postmodern attempt to re-see and rethink the Victorians’ struggle with new science and old religion.

Second, you, dear reader, should stroll through a typical public high school’s English department book-storage room. In most cases, you’d learn that Harper Lee was the last great American novelist, and that all the books you and your parents read in high school are still sitting on dusty shelves, some of them waiting to be shoved into students’ dusty lockers. The books you were assigned decades ago continue to be "appropriate reading," meaning the characters will not, for the most part, have genitalia, which seems to me to be misleading for teen readers, nor will there be scenes that stir up legitimate but uncomfortable questions about religion and politics, neither of which teachers are supposed to weigh in on.

Their blandness will confirm students' belief that reading out of the Harry Potter and YA zone is a joyless, wearisome endeavor.

Lodged back there on some forgotten upper shelf in a corner, waiting to be hauled off to the county office and placed in an oven set at roughly 451 degrees Fahrenheit, will be retired copies of Scarlet Letter, Moby Dick, Great Expectations, Tess of the d’Urbervilles, Huckleberry Finn, Jane Eyre, Sound and the Fury, White Noise and other ghosts of another time.

The newer books in the storage room will be rightfully acquired to expose some students to different cultures and rightfully help others feel represented by their own culture’s art, but they are not necessarily there to show how writers of yore spun their yarns in beautiful prose or how more recent ones re- imagine their genre, testing its limits to adapt it to an ever-changing, ever more complex reality. So. The magic of writing has just now transformed me from a happily retired man, happily sipping a terrific cup of coffee, while happily devouring another great book that teaching allowed no time for, into a sad old recluse in a high tower, staring out a window revealing a once lush literary landscape shriveling and wilting, its magic exorcised daily, that old, old wonderful world turning wasteland barren, a father and his son sifting for something of value among the ruins.
Posted by Roy Starling

Email ThisBlogThis!Share to TwitterShare to FacebookShare to Pinterest
Labels: Novels