My community college Philosophy of Religion instructor Martha Hart Tomlinson  was considered by many of her students as eccentric, artsy, aloof, distant.
When our paths crossed in her early sixties, she wore edgy but tasteful, eye-catching, eye-pleasing clothes, deleting the either/or from Oscar Wilde's aphorism, "One should either be a work of art or wear a work of art." She was and did.

She spoke in a soft Southern aristocrat dialect spiced with impromptu colorful lyricism and imagery Tennessee Williams himself would have happily pilfered.

For example, when describing protestant churches other than the Church of England (and its American branch, the Episcopal), she drew this analogy: "The liturgical churches buy their cigarettes packaged and ready to smoke; the rest roll their own." It was not a compliment.

Sipping her beloved black coffee before class one day, she gazed down at it as if searching for a tiny object at the bottom. Still staring into it, she said,  "Blacker than a hundred midnights / Down in a cypress swamp," and if you're my age, you know the source of that.

But Mrs. T, though visible to all of us, lived in the World of the Mind, the Mansion of Pure Intellect. She lives there now, but no longer burdened by her physical being, lovely as it was. 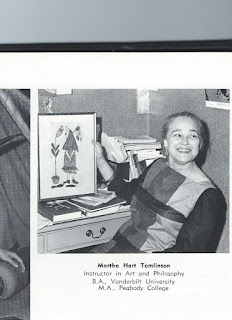 She lived to gain knowledge of all kinds, then transform that knowledge into wisdom; to surround herself with art, some of which she created herself; to listen to the world's great thinkers and understand them as best she could; to absorb all she could of "the best that has been thought and said" (Matthew Arnold's definition of culture), as well as the "best and happiest moments of the happiest and best of minds" (Shelley's definition of poetry).

Artist, intellectual, philosopher, theologian, quester -- she was all of these and therefore eccentric.

Just days after donating four years of my life to the Air Force, I enrolled in her Philosophy of Religion class at North Florida Junior College, mainly because I was curious about the words on either side of "of."

She didn't intentionally teach us anything, because that particular art was her livelihood, not her passion.

But I still picked up a couple of things from her.

She was the first person I heard use the words "inane," "mundane," and "banal." In an after-class chat with her, I used that last one, but mispronounced it, and she quickly corrected me. I'm still embarrassed by that.

And she taught me that a teacher's passion, should it exist, may inspire students more than either her subject or methodology. And that passion need not include the histrionics of an orator, evangelical or entertainer.

Hers was a contemplative's passion, quiet, hidden from all who failed to seek it or had no passion of their own.

A staunch and stuffy Episcopalian, she was a regular at the altar rail, but nature provided her a more expansive one in open air. Hence, she walked slowly. She never rushed. She observed everything, sharing William Blake's belief that "Everything that lives is Holy."

Just outside her classroom a shrub produced tiny red berries. On her way in, she never failed to touch them gently with awe, her eyebrows lifting, her face almost producing a grateful smile -- almost.

Once she saw a student snapping the berries off while he chatted with a friend and she paused at the scene for a second, then continued into her room. She waited well into her daily meandering musings to use their botanical cruelty as an example of living unaware, of being a person who would rather eat beauty than love it from a proper distance.

Her pedagogy consisted of gazing at the classroom ceiling as she pondered aloud the meaning of our assigned reading which she knew we were too dense or lazy to read.

She would refer, for example, to "poor Bertrand Russell," then look down at her desk (she sat with us in traditional student desks) and shake her head in sad disapproval at the philosopher-mathematician's misunderstanding of theology, of his ridiculing the oyster's coarse shell while ignoring the pearl within.

Bertrand Russell? We didn't know who she was talking about.

But thanks to her, I do now. And perhaps he did overlook the pearl.

She didn't reach out to us, thank God.

Three kids in our class of about 10 were well-meaning proselytizers and, when given the chance, enjoyed describing some of their church-related activities. Mrs. T openly referred to them as "our bible thumpers."

Teasing? Maybe. Sarcastic or disparaging? Probably yes and yes. For me? Entertaining.

She did not -- how to put this -- give a shit about our self esteem.

One day just before she returned our graded essays on an abstract and obscure topic far, far beyond our reach, a student asked the inevitable question: "Mrs. T, how were our essays?"

She looked at the ceiling and sighed. "I read every word of every one of them," she said, then paused and pretended to sort through the papers in front of her. "And I found nary an insight. Not one idea worth putting on paper."

And here she responds to an opportunity for some thoughtful teacher-student bonding:

A perpetually cheerful Bible thumper, her frown upside down as usual, greeted Mrs. T with a question: "Oh, Mrs. T! Did you read 'Peanuts' in yesterday's paper? You woulda loved it! I thought about you when I read it!"

Mrs. T leaned her jaw on her fist, her face expressing fatigue and boredom, gazed down at her desk and slowly shook her head.

Hyperbole, maybe. Some elitism, perhaps. A moment of embarrassment for the student, sure. But even then, before I had any semblance of a mind of my own, I saw some truth in it.

Mrs. T's insensitive response to the thumper's attempt to share a common pleasure would be reiterated for me two years later when Geoffrey Chaucer told me, "So short the life, so long the craft to learn."

Over time (while, perhaps, the thumper was still licking her wounded psyche) Mrs. T's barbed message moved me to ponder the way to martyrdom, sainthood, heroism. You must unclutter your path and watch for the dragon who sits by the side of the road, lest he devour you! Identify the distractions, dispatch them immediately, and continue the quest!

Mrs. T's final assignment in that class was a chapter entitled "Knowledge or Certainty" from Jacob Bronowski's The Ascent of Man, the book version of his 13-part BBC television series. She xeroxed it and the print was so smudged and grainy it was damn near illegible, and the words we could read were too big for us.
We were supposed to write a paper about it.

I could read some of it -- there was a reference to a guy named Heisenberg, and I was certain Bronowski had misspelled "Hindenburg" -- and just wrote some scattered thoughts, and she probably gave me a "C" out of generosity.

The day we turned them in, she talked about the chapter. In my memory, she showed us a clip from the series, but I don't know if that was possible back then. Here's what I "remember" seeing:


That line you just heard quoted from Cromwell -- "I beseech you, in the bowels of Christ, think it possible you may be mistaken." -- found plenty of room to lodge in my brain and has provided fodder for countless hours of rumination, so starkly eloquent, its cacophony producing just the right tone when spoken.

Mrs. T. didn't tell us this, she just pointed toward it.

Modern day "educationalists" would be absolutely certain her teaching method was ineffective: She didn't match her lessons with the standards, didn't interact with her students, didn't turn the class over to them, didn't monitor their progress, didn't praise their inept and lackadaisical work, nor did she festoon the wall with it.

But without the Divine Mrs. T's ineffective teaching, my brain would be emptier, my mind smaller, my knowledge of a "mind" nonexistent, my desire to contemplate, think and rethink, turned to ash.

O New Guardians of our children's learning, I beseech you, in the bowels of Christ, think it possible you may be mistaken!
Posted by Roy Starling

Email ThisBlogThis!Share to TwitterShare to FacebookShare to Pinterest
Labels: Memoirs